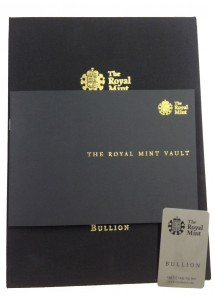 On the 11th December 2012 the Royal Mint launched details of its new service offering ‘The Royal Mint Vault’ at their original home the Tower of London.

A small number of attendees were invited to the exclusive launch event at the New Amouries, where they gathered to witness a presentation introducing both the Royal Mint Vault service and also changes to 2013 Gold Britannia coin.

Also offered is a ‘buy back’ service for new gold coins bought and stored in the Royal Mint Vault, giving customers the flexibility to be able to liquidise their asset on request.

Hatton Garden Metals are an authorised stockists of Royal Mint products and as such can supply the 2013 Gold Britannia and the 2013 Gold Sovereign as well as other products in the Royal Mint portfolio (subject to vailability and minimum order level). These coins have the benefit of being exempt from Capital Gains Tax and VAT due to their status as legal tender. We are currently awaiting further details and pricing of the new Royal Mint Vault service offering and will look at the possibility of offering services based on this later in 2013. For further details about the Royal Mint Vault service, or any other services from the Royal Mint please feel free to contact us where we will do our utmost to be of assistance.

New Service Offering from The Royal Mint Vault was posted on December 12, 2012 at 3:13 pm in Investment Gold Service, Investment Silver Service and tagged as Capital Gains Tax, gold, gold bullion, gold coins, Gold Sovereign, Gold Sovereign Coin, investment gold, investment gold coins, investment silver, royal mint, royal mint vault, vault. It was last modified on April 4, 2014 at 9:48 am. You can follow any responses to this entry through the RSS 2.0 feed. You can leave a response or trackback from your site.